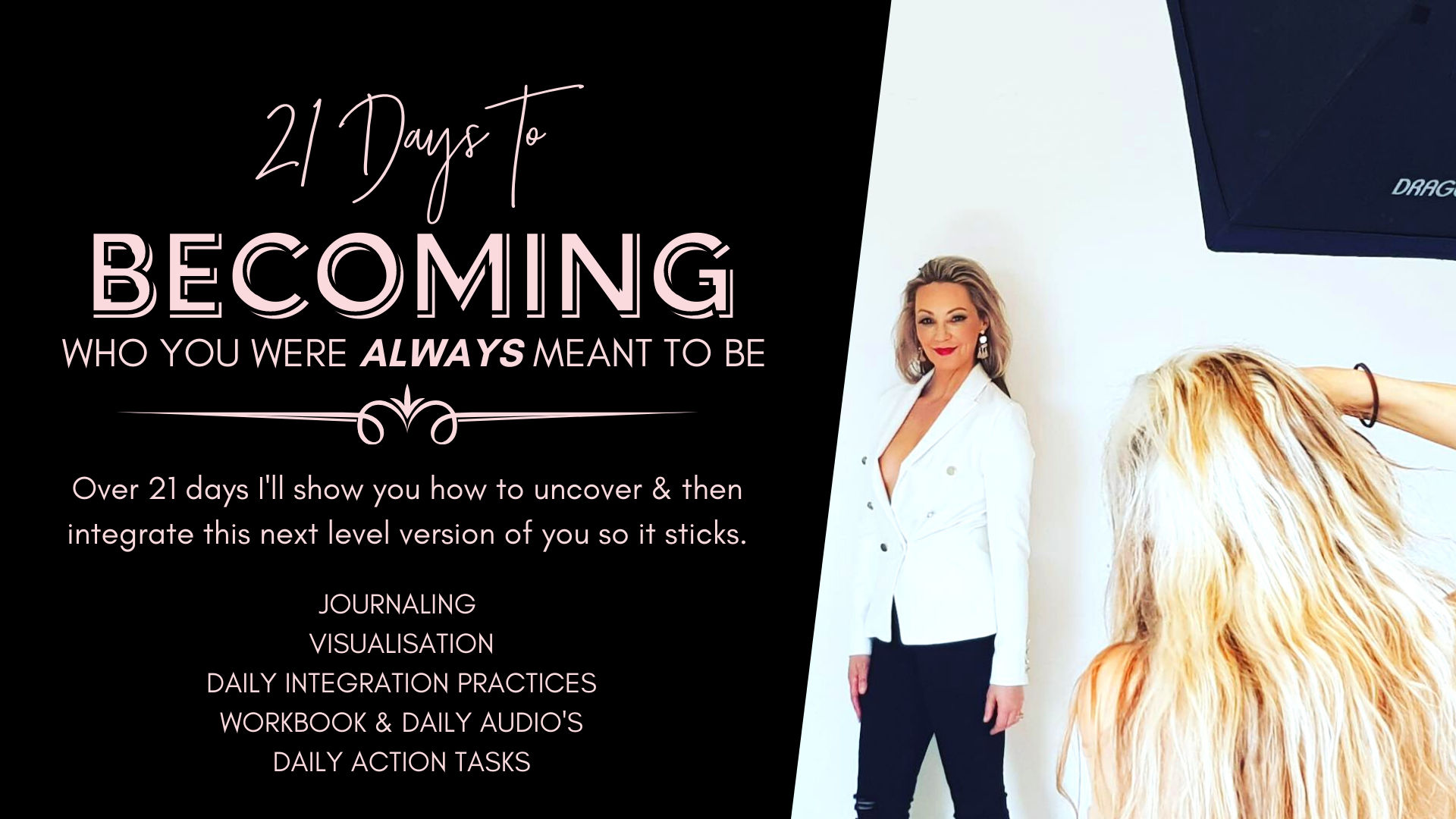 When we make the commitment to level-up our personal brand or business in some way it can sometimes take a little while for our minds to catch up…for us to fully INTEGRATE this next-level version of ourselves and more often than not we find ourselves reverting to our default way of thinking and doing. Repeatedly.

Change, especially change around personal growth and expansion, is challenging in many ways, and the longer we’ve been operating a certain way, the more difficult adopting change can be.

I’ve been working with people hungry for expansion my whole adult life and I’ve noticed a very common theme, hell, I’ve even experienced this myself.

The theme is this….lack of integration only ever creates short term success and once enthusiasm and novelty have burned themselves out we revert, for every 10 steps forwards we take 9 steps backwards.

I know you’ve experienced this…I know you’ve been SO hungry for change, for expansion, for playing bigger….only to find yourself back at square one and beating yourself up for failing…again.

So let’s talk about integration a little more so I can make myself clear for you.

My own experience of this was working hard and pushing for a big result and achieving that result….only to find myself in another downcycle.
And it didn’t matter what area of life it was…getting my body in amazing shape only to have that same extra 3kg magically re-appear, having my biggest EVER financial month followed by a month or two of failing to come even close to replicating those numbers or attracting amazing, super high-level clients and swearing this is all I’m available for only to have a drought of said clients for weeks on end.

Any big wins in my life I now know I need to take the time to integrate this new level, get my feet underneath me again and then go after the next thing. When I fail to do this the shit hits the fan, every time, no exceptions.

Whatever the big win is, it’s all the same because it’s all ABOUT the same thing….lack of integration.

A lack of the required IDENTITY SHIFT to maintain that next level.

Just like a when lottery winner goes broke in 5 minutes flat because they haven’t shifted their identity to that of a wealthy person. Their identity is still that of a broke person and so they do everything they can to align their circumstances to match that identity again.

It’s the same when an obese or overweight person loses a lot of weight but still identifies as an overweight person, again, often they will do everything they can to align their circumstances to match that identity.

It’s the same for the coach who makes a quantum leap only to sabotage their success because they’re uncomfortable with bigger success, more money etc

The overweight person who DOES integrate and assumes the identity of a thin person thinks and behaves like a thin person because this is who they are now….THAT is integration.

The coach who BECOMES a High-Ticket Coach who attracts high-level dream clients on repeat and makes a shit-tonne of money month in month out does so because this is who they are now, they’ve created a new, much higher level of normal for themselves BECAUSE this aligns with how they see themselves….because it aligns with the IDENTITY they have assumed, which is that of a wildly successful, always in demand, premium coach.

Integration isn’t difficult but it requires attention…LOT’S of attention, especially at the outset of the creation of change and after the novelty has worn off.

This is why we can get hyped about something, make a big commitment and then nada.

When it comes to up levelling in our business or how we intend to show up and influence our corner of the interwebs we need to move past the initial boldness and bravado of OWNING IT and into integrating this change (who we aspire to/want/know we can be) into every fibre of our being for an extended time…enough time for this up-levelled identity to become 2nd nature for us.

Enough time for our thoughts, behaviours and actions to ALIGN so that they match up with our newly adopted and expanded identity.

David Rock (who founded the coaching company I trained under 2 decades ago) along with Jeffrey M Schwartz introduced me to the phrase “ATTENTION DENSITY” somewhere in the early 2000s when they wrote about “A brain-based approach to coaching” and I honestly believe that attention density is the key to creating the type of change we all crave because what they said made so much sense to me. I’d been practicing attention density for many years, I just didn’t know I was doing it.

In summary, they back what we already know )which is that what we focus on grows, or in this case STICKS) with brain-based science that shows the way our brains create new neural pathways when we apply attention density.

Attention Density being the concept that intensive attention for a prolonged period produces structural changes in the brain; the more focus or attention we apply the more “attention density” occurs.

I don’t know about you but I find this not only exciting but oh so PRACTICAL.

We can ALL practice attention density, we can ALL apply intense focus and attention on the change we desire.

Even if you’ve never heard the term attention density before I know you’ve applied this principle.

Look back at any success or big change you’ve ever created.

You made a decision

You remained focused on what you wanted.

You thought thoughts and did things that aligned to the outcome you wanted.

You achieved your desired outcome.

It’s not difficult to apply attention density, in fact, it’s VERY simple….it’s just that we often forget, become distracted or dishearted and quit before we ever achieve our desired outcome.

This is EXACTLY what this program is all about.

Over 21 days I’ll show you how to first uncover and then integrate this next level version of you so it sticks.

Michelle is a fantastic strategist but she is also a great mindset coach who will challenge your beliefs and help you push past them.

Being a mindset coach myself I truly take my hat off for her. She is the master!

I believe everyone needs a coach. Lol we are all coaches but boy do we need someone to keep us accountable! We are all human at the end of the day and Michelle totally lives what she teaches.  So tap into her mindset and attitude! That is gold!

I sold a high ticket program that more than covered the cost of Michelle’s program.

I now have a working funnel I can replicate and use for selling any program.

But most important of all, I know so much more about myself.

So let me tell you about this program...

“BECOMING” is an immersion program that runs for 21 days straight so you’ll be expected to give around 20 minutes a day, every day for 21 days…remember we are trying to create new habits and adopt a new, up levelled identity that will lead us to achieve everything we desire.

You can begin this program whenever you like, simply purchase right now and dive into Day 1.

Having been aligned with a network marketing company for 2 years with some success but not reaching the point I really wanted to be, I reached out to Michelle.

During this time I really had to dig deep, and Michelle helped me gain clarity on what I was trying to achieve and who I was trying to attract. But more importantly, she helped me realise that I already had everything within me and it was all about showing up consistently.

I loved the process of discovery, of exploring who I needed to be in order to become a leader and my new mindset reflects those realisations – so I finally feel like I’m stepping into that leadership role.

With that change of mindset and focus, I almost immediately attracted some fabulous women into my business, who I am now working with to help them grow their own team and customer base.