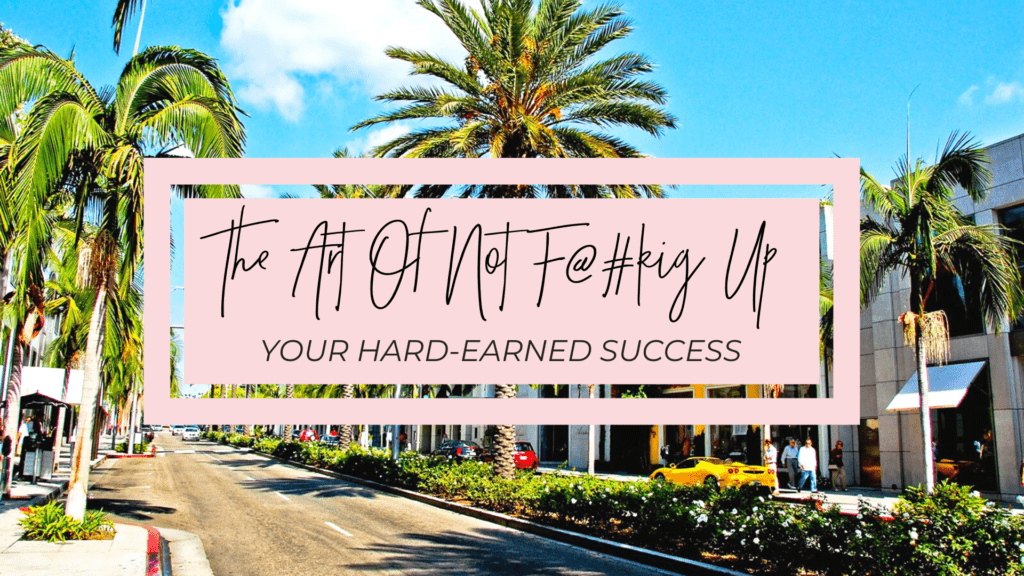 The Art Of Not F@#king Up Your Hard-Earned Success.

Here’s the thing no-one tells you about success.

When it arrives it brings with it a can of worms you’re unprepared for.

Sure, there’s the momentary euphoria of having “made it”, of having finally achieved what you’d been working so hard to achieve but far too often the feeling of euphoria short lived.

Despite the many hours you’ve probably spent imagining your success when it hits sometimes it can take a little while for everything else to catch up. I guess it’s not too dissimilar to someone who’s had lap band surgery without the psychological counselling required to come to grips with the fact that EVERYTHING surrounding their relationship with food has to change including socially (a friend told me the story of a relative of hers who blended her entire Christmas Day meal into a smoothie and freaked everyone out as she sat at the table drinking it though a straw),

Had they been prepared psychologically for the change I’m sure adjustment and acceptance would have been less traumatic.

Don’t get me wrong I am NOT for a second suggesting success is traumatic, in fact it’s the most amazing feeling in the world.

At the guts of it what I want to tell you is that success doesn’t automatically correct your mental and emotional crap, in fact it can make it scream louder for a time because the risk to what you have is now greater than it was before.

Another analogy (stay with me) is bodybuilding, I recently attended a training camp with World Champ Nicole Wilkins and she voiced what I already knew to be true, if anyone takes on the challenge of getting on stage because they think it will “fix” the relationship they have with their body or food or whatever brand of battle it is they’re fighting, they’re sadly mistaken, the mental and emotional crap is tamed (maybe) in the lead up to being on stage but the minute they step off stage and are able to hydrate and eat (and their immediately loses it’s stage magnificence) the mental battle begins in earnest.

It’s the same with success.

It won’t fix your crap.

But the awesome news is that it forces you to deal with said crap because (again) the risks are higher than ever before, if you don’t fix what you need to fix NOW you can watch your gains slip away.

After a particuarly trying time a few years ago I reflected on what was revealed to be a pattern that accompanies my successes (one you may only begin to recognise) and it goes like this.

Like any cycle, this one has triggers and warning signs I’m now aware of, there’s zero guarantee this cycle won’t repeat itself but knowing it exists already has me fired up and ready to face it head on if or when it arises, in fact I can’t wait to test my approach for dealing with it.

The leap is where you’ve created your vision, set yourself a goal and you’ve launched yourself into action.

This is where you’re making shit happen on a grand scale and excitement is high.

The double edged sword, freaking AWESOME because you’ve finally achieved the very thing you’ve been working so hard to achieve but crappy because it’s (or can be) the trigger for the shitty phase to follow.

This is where the shit hits the fan.

Success is like a drug that is soooo highly addictive, we become addicted to the high of winning and in the times between the chase and the wins, in the downtime, this is where our crap surfaces….usually always self-worth stuff or some version of it.

I feel most alive when I’m experiencing the thrill of the chase, when I’ve trusted my gut, followed my instincts and I’m seeing the first signs that it’s going to pay off.

When the win comes it’s euphoric…heady stuff and there is no high like it but with any high comes the low.

The adrenaline rush of success gives way to “what now?” and if you don’t catch it here it can spiral into living in your head and spending way too much time aimlessly trawling through Social Media looking for the meaning of life.

Integration is where the crap surfaces but it’s here where we deal with our crap and come out the other side, weary, beaten up but stronger and wiser than ever before.

The other side of this is the real win.

Whenever we’ve been to hell and back it forces us to re-evaluate who we are, how we do things and what we really want our lives to look like for the next leg of the journey.

Recently a girlfriend reminded me of my “irritants” philosophy which basically means I decide to audit and clean up my life of all the things that are pissing me off.

Basically I list up all of the things in my life that are irritating (and distracting) me and then set about the process of eliminating every single one of them.

Some things you can’t eliminate entirely (like an errant family member) but you can eliminate your response to them.

In life things pile on top of us one after the other and when we’re busy instead of rejecting the things that annoy us we absorb them and before we know it we’re weighed down by a pile of crap, often lots of small things that have gone unnoticed.

For me recently one small thing was I joined a gym when I moved and I don’t like it, every day I went (or didn’t) it pissed me off and I was putting up with it.

After that one line from my friend it dawned on me that I’d let the “irritants’ pile up.

The same day I went and signed up at a different gym and I’ve been loving it!

I call this an irritants list because it’s not big stuff, usually we’re forced or called to deal with the big stuff but the small stuff, the small irritating stuff, can pile up.

The times after I work though this are when I feel the clearest, most aligned and at ease with where I’m taking my life and my business.

Its a powerful tool, a life “de-clutter” I guess you could call it.

This is visioning, goal setting and deciding on the next course of action given everything that’s been thrown up in the last few phases.

This is where I can feel my pulse return, my energy lift and the excitement build in my belly

These days I keep things reigned in at this stage so I don’t run off half cocked, I’ve forcibly inserted the next step to ensure I don’t go too deep down a rabbit hole that will ultimately take me no-where.

This is where I let myself go nuts and get excited.

One of the greatest assets an entrepreneur can possess is self-awareness, knowing yourself and what makes you tick is critical at this stage.

Knowing your strengths and the things that will trip you up will mean you can tap into whether or not this decision is right for you right now.

Alignment for me looks like values work, journalling, journalling and more journalling, setting new crystal clear goals and deciding the how…how I’m going to get from A to Z while fully enjoying the process.

Ease, Hustle, Fun and Adventure are all key components of alignment for me.

This is where the rubber meets the road and I’m off and racing again.

This is the thrill of the chase with the anticipation of success.

I’d be lying if I said this wasn’t my favourite part.

So there you have it, what I call my success cycle with the good, the bad and the ugly bits.

Writing this was awesome, deciding to hit publish of course made me ponder “what if I’m the only one who experiences this??!!, god I’ll look like a whack job!!!!”, however I know from countless conversations with my peers and with my clients that most women experience some version of this around success so I’ll take one for the team and put it out there hoping it helps bring some understanding to your own struggles whether they be in the past, one your experiencing now or so you can tuck it away in the memory bank in case you ever need it.

This probably goes without saying but this is in no way a reason to avoid great success, the growth and wisdom gained is well worth the frustration and it will serve you to go again, bigger, better and badder than ever before.

Hey…are you part of my Free Commmunity Secret Coaches Business yet?

SCB is filled with some great high-quality content with close to 20 free mini-programs and masterclasses all designed to help you move the needle on the goals you have for your coaching business.

Click the button below to head on over…I can’t wait to see you there.