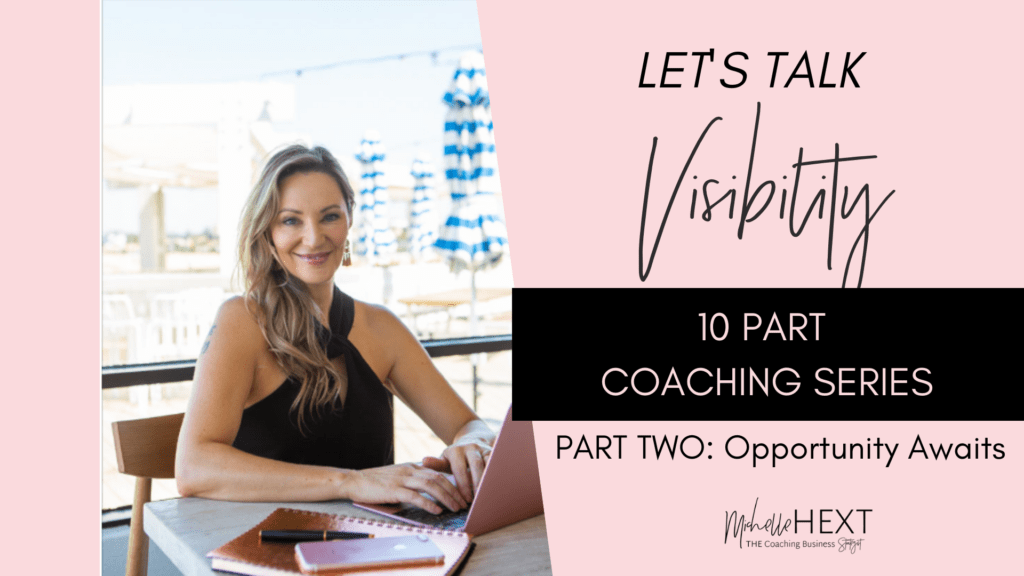 This was when I became officially certified as a coach and began growing my coaching business….well before Facebook was even a thing….back before we were throwing around terms like “global business”, “6 or 7 figures” and “share your message with the world”.

This was when I officially began sharing my message as a means to growing my empire, although back then my goals were far more modest, even if they felt big to me at the time.

Back in the ’90s the opportunities we have now to create a global audience simply didn’t exist.

But make no mistake….opportunities DID exist and you can bet your ass I made the most of them.

One of my earliest efforts was to convince my local newspaper to give me a 13-week column in their widely-read weekly paper.

I had the idea for a 13-week coaching program that I would run via my column loosely based off of the coaching training I had just completed.

Every week I would write, for want of a better term, a lesson and set my readers actions to take ahead of the following week.

It was a massive success, people would stop me in the street often sharing with me how much they were enjoying my column and the changes they were making in their lives because of it.

I used the column, in tandem with some paid advertising to fill my “Information evenings” where I would fill a room with local people, speak from the front of the room and taking bookings for discovery calls.

This was how I first filled my workshops and gained clients….from the get-go…no mucking around for this lady!

Fast forward to when I launched “Glow Women’s Fitness Online” (my first online fitness business) in 2005 and again used messaging to build my business.

I reached out to the publications I wanted to be featured in…well-known fitness magazines, Sunday newspaper and everything in between.

I created great relationships with editors across Australia and would often be called upon to write or contribute to bigger pieces.

I was featured in too many publications to count but again sharing my message in print grew my business AND it got me noticed.

I was invited to participate in a wellness show on Foxtel.

I was also personally invited to cast for the Australian version of The Biggest Loser (amongst other things), something I declined due to my values not being aligned with the concept but I’m not gonna lie…being asked did wonders for my confidence.

I got the attention of “Commando Steve” (from The Biggest Loser) when his team saw the way I was interacting in the forum of his now-defunct online program which culminated in Steve’s team flying from Sydney to Melbourne to film me for the entire day and using that footage in his promotions across the internet.

I also had Chanel 7 come to film me at my dojang for the national news after I gave advice to women about personal safety after a woman was raped and killed in Melbourne.

The last two examples were not deliberate attempts to secure PR but were just me being me and feeling a strong desire to contribute on topics I was passionate about.

And this brings me to my next point….your messaging MUST come from a place of passion and service because this is what your audience will respond to.

“People won’t remember what you said but they will remember how you made them feel”.

You’ve heard that quote before right?

NEVER has it been more true than when it comes to sharing your message.

I couldn’t tell you how many 100’s of 1’000’s of words I’ve written over the years…let’s just say MANY….and the majority of my audience will have read many of those words.

I’ve probably shared the same message, with a varying theme, 10’s of 1’000’s of times but my audience keeps coming back.

Because they know they will leave one of my posts FEELING inspired…FEELING as though they can do anything they put their mind to.

They’ll be reminded of all they are capable of.

The words will be forgotten.

But how I made my reader feel will remain.

I know that when I need a rev up I’ll revisit books that put me in my zone (Relentless by Tim Grover or 10X by Grant Cardone) and often I’ll only need to read a page or two or listen to a single chapter of an audiobook to be bursting out of my skin and ready to tackle something big and juicy once again.

Our words have power.

It’s a given you have knowledge but knowledge isn’t going to be what keeps people coming back for more….your passion will.

Your commitment to serving your audience with passion and a strong desire to positively impact them is the recipe for creating a loyal and loving following.

I am 100% committed to serving my community and it’s really quite interesting when you think about it because no-body is ASKING me to show up every day to serve them.

Some days as I am about to hit the “live” button on my desktop the thought will pop in my head that who the fuck do I think I am to just show up and talk at people?

No-one is asking me to show up and tell them how to suck eggs.

No-one appointed me the queen of the internet and told me to show up.

But the thing is I can’t NOT.

I’m compelled to serve my community.

I HAVE TO share what I know and I have to do it regularly.

Because I SEE the impact.

Because I’m rewarded every day when I receive emails or messages from someone in my community telling me they’ve implemented something I’ve taught them and it’s helped them to move the needle on their goals.

Or that I’ve reminded someone of who the hell they are and fired them up to take BIG, massive, scary action.

Or when someone schedules a discovery call or signs up for a program and tells me that they’ve been following me for years, have been doing the work and are now finally in a position to work with me BECAUSE of the information I’ve been sharing with them over those years.

Right now you might be thinking…that’s great Michelle…I love that you FEEL good about this but I need to make money!! SHOW ME THE MONEY.

Rest assured that sharing your message and serving your community WILL reap financial rewards BUT that will only follow the passion piece…passion first….everything else second.

We’re going to dive into how to make money from your content soon but in the meantime let me share a little story with you to keep you excited about that prospect.

I took a hiatus from my business in 2017 to travel the US and Australia speaking and when I stepped back into it at the end of 2018 I was basically starting from scratch as I had put all of my efforts into my other business.

My social pages were a wasteland with spinifex rolling through the streets.

I was giving myself time to feel my way back into things after stepping out of my coaching business and into global speaking tour for 18 months,.

I had come to the realisation that I wanted to work exclusively with coaches but that was about as far as I had gotten…and wasn’t yet ready to launch any products.

I just wanted to show up and serve and get my feet back underneath me and basically just start a conversation with coaches so I could see what was going on for them.

Within 4 weeks I had made $42K without spending a cent in advertising, just showing up and serving my community every day.

This was enough for the coaches in my community to see me, understand me and know I could help them….I’d been providing such great quality free content AND they could truly see I cared so trust was built, I’d established myself as an expert in my space and voila.

So yeah….get your message right and show up regularly with a desire to help, not just make $$$ and you WILL make money AND if you do this consistently over a short period of time things can shift fast….faster than you might think.

You have a GLOBAL AUDIENCE waiting for you to show up and serve them so what the HELL are you waiting for?

NEVER has it been easier to reach the people you want to serve and work with so NOW is the time to begin making the most of this opportunity.

It’s time to grab this opportunity with both hands and go for it.

“Getting it right” is pretty vague right? I mean what does that even look like?

I’m glad you asked……stay tuned for Part 3 when the rubber starts to hit the road….for now, I simply want you to consider the opportunities that lie at your fingertips and get excited!

Looking for a Mastermind? 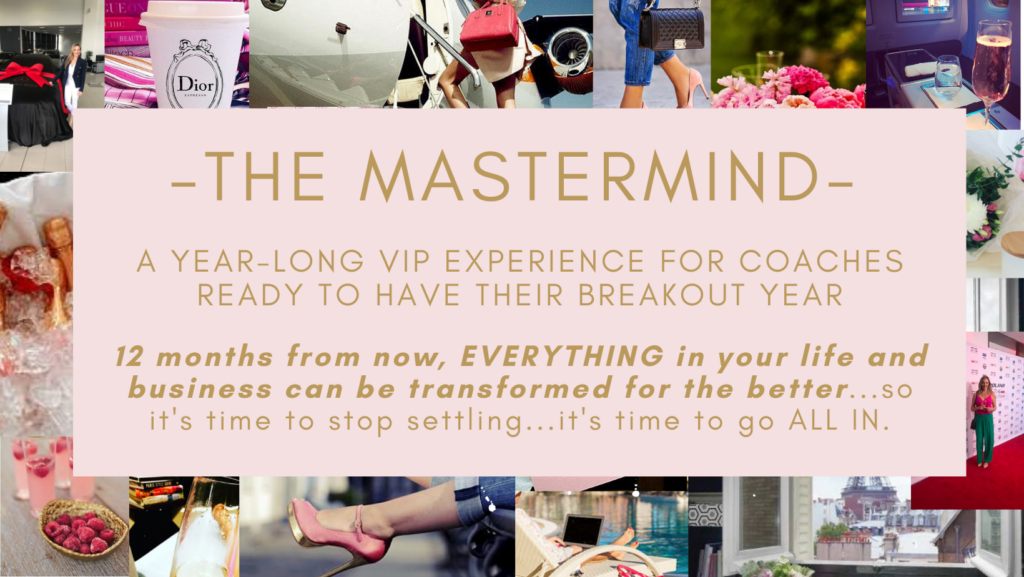 TAKE ME TO - THE MASTERMIND - NOW! 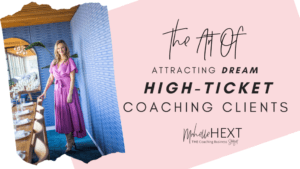 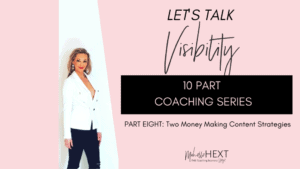 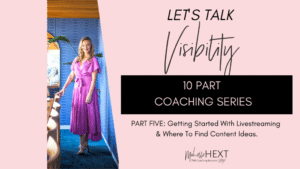 LET’S TALK VISIBILITY: Part 5 – Getting Started With Livestreaming & Where To Find Content Ideas